Kelle Sutliff is a Psychic Medium, Author and Guest Radio Host. She does readings for clients all over the world and every year she predicts the upcoming years events with much accuracy. She even predicted the Clinton/Trump ticket with a Trump win as documented in The Boston Herald in 2015. Sutliff also uses her gifts to help find the missing. 2019 is one year that will not be boring. It’s a year of expression. 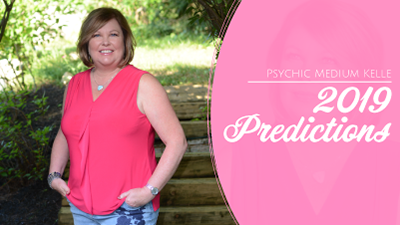 “2019 is a 3 Energy year in Numerology and will not be boring by any means. It’s a year of expression and how we communicate our truth and express our truth. Honesty is the best policy and you won’t get away with any lying. The truth will always come out and communications on all levels are important. It’s a great time to be creative, expressive and have fun. It is important to have grace and honor in this expressive year.” says Sutliff.

Sovereignty is the big word for 2019! You will see least costly strategy for governments, business and personal relationships to come together. Interdependence sovereignty of actual control over state borders will become important all over the world, not just in the United States. State taxes in AZ and TX help assist in protecting their own states, not just at the federal level. This will keep their borders safe for their state communities, and the Federal Government will be giving possible tax breaks with assistance to those communities. The whole border control system will change especially around the time frame of June. It’s not about building “a wall” it is about sovereign dignity to the people who live in the United States and other countries. All nations around the world will be building their sovereignty too.

Tech companies will have a big boom, and look for mergers in this industry especially more so than usual. Companies like Facebook will start to fade out with new companies that start to trend emerge. Any business that assists the elderly is a great investment or start up venture. Look for businesses in the community that help take care of brain disorder/disability of patients to emerge. More building and construction continues around the world, as it will be booming for the next five years, so get ready for lots of delays while traveling. There will be new bridges being built everywhere around the world. It is a great time to work in the trades. Look UP! Space Exploration is on the rise for many countries. It will be competitive amongst everyone. The US will be a leader in space exploration and women scientists will be behind this.

2019 will be known as “The Trump Economy” as the economy booms with jobs in the U.S and the GDP still rising to 3.7% or higher, people will see their investments improve. Trade sanctions will play a role in settling the market down towards the middle of the year, but slow and steady will win the race. Family income will continue to exceed and improve in the United States. You will see percentage rates soar into the 90 to 98 percent rate; something the US has not experienced in over 10 years. Jobs will be plenty, so no excuse not to work.

Look at the year 1973 as this past history is similar is what happens in European countries. They need to be careful for inflation opportunities especially in United Kingdom, France, Russia and Italy. Tax breaks will help keep this at bay. The oil gas crisis was a huge indicator in France recently that the government needs to respect its people and not use them. You will see more riots/protests around the economy throughout this destabilization. The fall of 2019 objectives get better and tax breaks are given to get their economy moving. You will see more countries moving away from the aid of others and take their own sovereign nations more seriously. The United States will continue to put the U.S. first.

Who is out in politics?

Theresa May Prime Minister will continue her duties, but she does not finish the run. There will be a man with strong banking background to pull their economy back. He has an S in his name, possibly Sajid Javid? Nancy Pelosi does not finish her appointment, as she is a band-aid for the Democratic Party.

Trump finally comes into his third year of his term. The U.S. finds more acceptance with him being president and his goals for the country. I stated this in my 2016 predictions. People will accept his role and his work as President so far. His communication gets better, and believe it or not he will become more dynamic with his ideas. He will have to get creative to keep our sovereign nation on a steady path, but it will happen. He will learn to communicate better and not work in emotion, but he will always speak his truth. He’s in it to win it—another term.

A 3 year/the 2019 year is all about speaking your truth with more boundaries, and not to hurt one another. You must have more grace with your words and not gossip. Some news agencies will have a hard time with this new 3 energy year! It’s a baby girl! For Prince Harry and Meghan Markle.

Everything feels very dry around the world, which always creates Earth shifts. That being said, those of you who live by these vaults could experience more shifts than usual. Get ready for hot summer seasons. Then when it does rain it goes extreme. We can’t win in the weather game this year.

The case on Steven Avery (Making a Murderer) will be reopened by April of 2019. Remember this is the year of speaking the truth, no more lies and cover-ups. This energy is perfect timing for this case to be broken up. “Let Freedom ring!” You will also see many more old/cold cases being solved. Detectives get ready to work.